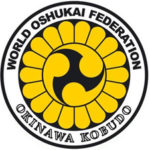 Okinawa Kobudo is a style of the weapons fighting developed by the Matayoshis Family. It was created in XIX century by Shinchin Matayoshi and developed later by Shingi, Shintoku and Shinko.